A click on a picture will usually give you a larger image. 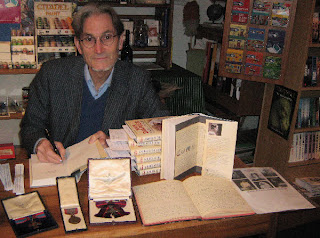 Wow! What a morning! Thank goodness we'd ordered an extra 20 copies of War Diaries - A Nurse at the Front.

Dick Robinson and his lovely wife Lisa came to chat about the book and he'd hardly put down the medals and diaries of his great aunt 'Edie' when he was rushed into a great line up of people wanting to ask him questions and, of course, to buy the book.

I wanted to grab a shot of both the medals and the diaries to show you but we were so busy at the till that I had no time to. (As they are off to the Imperial War Museum, I doubt I'll get another chance) 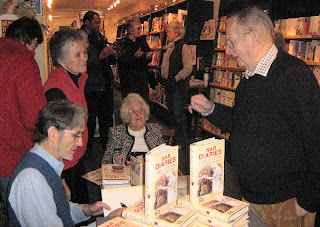 About 65 copies were sold between 10.30 and 1 pm. Apart from 7 books, set aside for customers, the only ones in stock by the end of the day were Dick's own copies in the window.
We had posters up all around the town and beyond but I think we can thank Dick for the great turnout. His talk in Blockley was well attended and many of our customers must have been in that audience.

Thank you Dick and Lisa and thanks to all those helping on the day.

It's bigger than you think, folks.

Our shop has been compared to the Tardis